GraalVM is a universal virtual machine for running applications written in JavaScript, Python 3, Ruby, R, JVM-based languages like Java, Scala, Kotlin, and LLVM-based languages such as C and C++. It removes the isolation between programming languages and enables interoperability in a shared runtime. It can run either standalone or in the context of OpenJDK, Node.js, Oracle Database, or MySQL. In other words, Graal provides a boosted low-level Java Virtual Machine[1]. Some benchmarks shows that the basic implementation of Javascript Engine using Graal won against Google V8 Engine. [2]

For a proof of concept to study the execution time and memory usage, in a custom language interpretation, the target codes were written in Tiger. It is an academic language with specific issues thought to put down the student abilities, due to that reason the language specification has been changed a little to simplify the proof of concept.

The Tiger language specification has been modified to simplify the development time of the proof-of-concept.

The Truffle framework allows running programming languages efficiently on GraalVM. It simplifies language implementation by automatically deriving high-performance code from interpreters. It brings a simple way to transform custom AST to Graal AST nodes. Truffle is another level of abstraction, but, this API generate code statically using Java annotations, so there is no extra level of code in the interpretation stage; there is only Graal.

All languages use the abstraction of specific types, or a way to group data by its characteristics, even in the backyard, so some sources argue that a language have no types, that is not really true. 2 + 2 returns four, and that is an integer (number, digits) from the beginning of the times.

This Tiger approximation has four primitive types in the interpretation stage.

These are the types mapped using Java POO patterns definition:

Tiger script parsing is made using ANTLR 4.0 framework, generating a basic Abstract Syntax Tree to evaluate the script. The first approach to interpret the source code can be visiting the obtained AST, but the main idea of this work is to use/test the Graal and Truffle potentials.

I use the previously obtained AST to transform it into a Truffle tree. Most of the compiler’s implementations have four primary stages: 1 - Tokenize, 2 - Obtain a tree base on the grammar, 3 - Semantical analysis, 4 - Generate code, the first two stages are achieved using Antlr, the next two are the Graal/Truffle matter.

The variables and function scopes are implemented like tree-parent-struct. Every scope has a parent scope. If a variable does not exist in the current scope, then, it is searched in the parent scope until the variable is found or there is no parent and throw a “The variable x is not defined” exception.

In dynamic languages, usually, the actual operation behind the multiplication ‘*,’ the division ‘/’ or a less-than ‘<’ comparison operator is typically known only at runtime. For optimal performance, a language implementation needs to ensure that these operators are not looked up for every single operation.

My first approach to the variable (read, write) and function lookups shows that there is a massive overhead in the execution time, almost 10X time of the final execution result.

All the variable and function arguments are stored in FrameSlots (this is the Truffle API implementation to store values). I ensured that every variable access (read and write) address is stored in her specific AST Node to avoid walking through the Scope tree structure at each read/write call. The variable context structures are built in the semantical analysis stage and written in the node as an O(1) access java field.

The truffle API options to read and write values bring a way to avoid the boxing and unboxing of those values. However, the only way to pass arguments to a function call (Mapping to Graal RootNode class) is passing the values as Object values. So, one way to deal with this is trying to minimize the unboxing operations. The only unboxing operations are present in the ReadArg node evaluation in the AST.

Truffe can set the function call arguments in an API class named Frame, that is optimized in the Graal VM execution.

In Tiger, we have nested functions args scopes. For this reason, I added an extra argument in the Frame object passed to a function call.

To pass arguments to a function call, I set the arguments as follows : 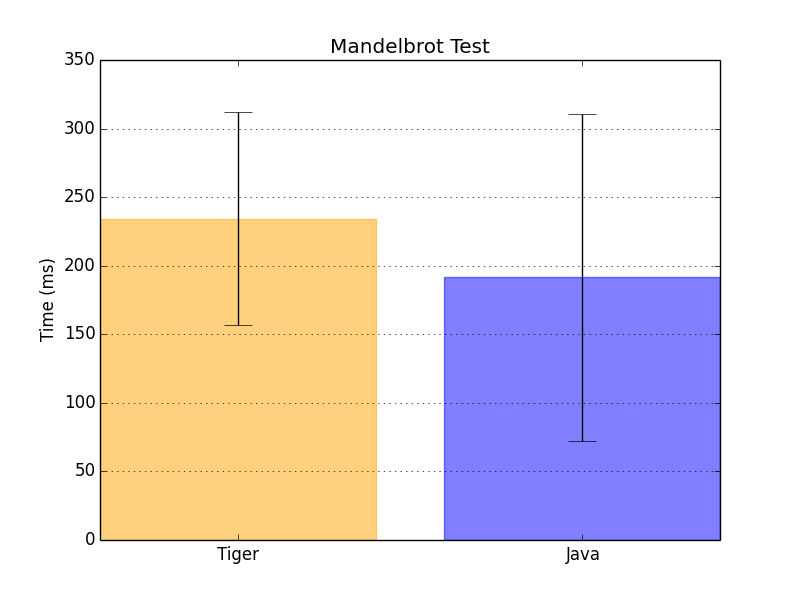 The results are very encouraging. The deviation between the mean, the max and min execution time values is because Graal VM ensure inline function calls and cache the most cacheable nodes (like Integer constants), so the first calls have remarkable delays, but this is a Java run effect too as we can see in the figure above.

Here you can find the source code of this cool project.